The Barbie logo is one of the world’s most iconic and recognizable logos among girls. The logo has been through many iterations over the years, but the current version is the original version created in 1959.

When the “Barbie Doll” was developed in 1959, the founders of Mattel Creations, Elliot and Ruth Handler, designed the Barbie emblem.

Ruth Handler, a co-founder of Mattel Creations, was inspired to create the doll after observing how much fun her daughter had playing with paper dolls. Barbie was created on March 9th, 1959, due to Ruth contemplating various designs and concepts before being eventually inspired by a German beauty named Bild Lilli. The original Barbie emblem was written in a sans serif typeface when initially presented.

The Barbie logo has played a significant role in the constantly increasing popularity of the Barbie Doll.

Barbie’s signature hue is hot pink. The primary reason of selecting this iconic color was to attract girls to the Barbie brand. When combined with a typeface that resembles children’s handwriting, the logo gives a sense of youth, enthusiasm, and playfulness. The Barbie emblem has undergone several changes since its inception in 1959, but it has always been a brilliant pink.

The Development of the Barbie Logo

The Barbie logo is one of the few logos that restores its original logo design after several redesigns. The emblem had five significant redesigns, but the company opted to return to its roots in 2009, adopting the original fancy girly inscription as its official visual identity. 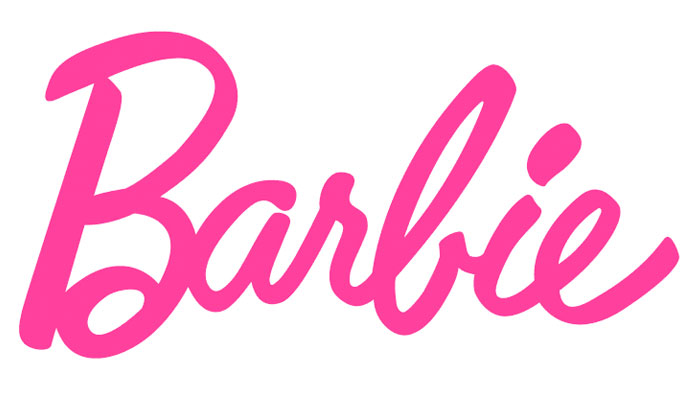 Its original logo for Barbie was written in a slightly elegant, youthful style. The initial letter, “B,” is written in capital letters, and the other letters are written in lowercase. The letters “e,” “r,” and “a” are smaller than the second “b” in the inscription, which is roughly the same height as the uppercase “B.“ The letter I appear to be somewhat more significant than the letters “e,” “r,” and “a,” and just smaller than the second “b.”

There are two distinct elements in the Barbie inscription. The letters that hop around randomly are a significant attraction. The fact that they are entirely different at the bottom and top gives the logo an airy, relaxed appearance. This aesthetic choice conveys a playful attitude, airiness, charm, and naivete.

The second highlight is the letter “B curl, “which is at the bottom and facing inward to form a little oval. 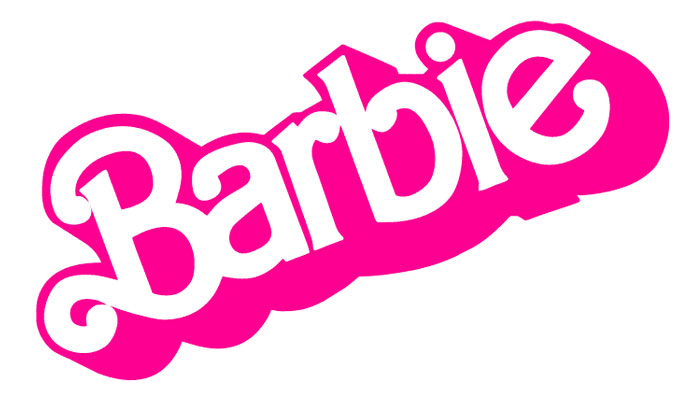 After almost 16 years of usage, the original Barbie emblem was replaced with this new version which has a 3D effect. The designers chose a 3D moniker for Barbie to revamp the brand identity. The name was functional, but it didn’t conjure up feelings of delight. Most of the focus is on the shadow and rigidity that gives the lettering a 3D appearance.

Except for the capital “B,” all of the letters in the logo are lowercase and of the same height. The line is flat, and the characters are organized relatively linearly. Because the inscription is positioned diagonally, its gravitas is diminished.

This fashion conveys a sense of optimism and joy. The oddest letter is the “B,” which has two chic curls. Because of the intense shadows, the remaining characters appear stretched and wide. 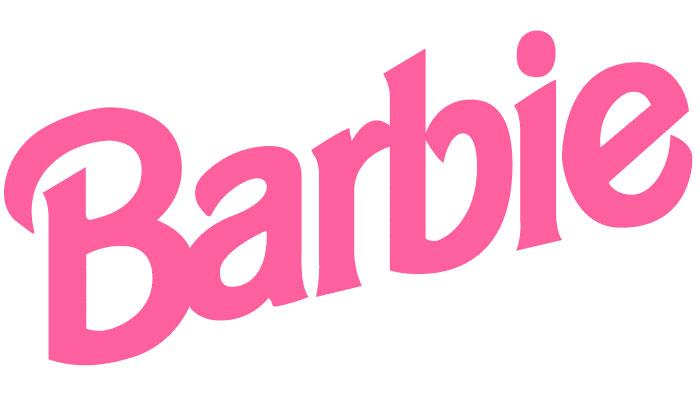 For kids’ sake, the designers decided to add some happiness to the Barbie emblem in 1991. By removing the complicated aspects, they made it more accessible. The uppercase “Additional “‘s curls were deleted, but the letters’ shapes were preserved.

Despite the conservative language approach, this logo design was thought to be far more engaging. The lowercase letters I and “b” were about the same height. 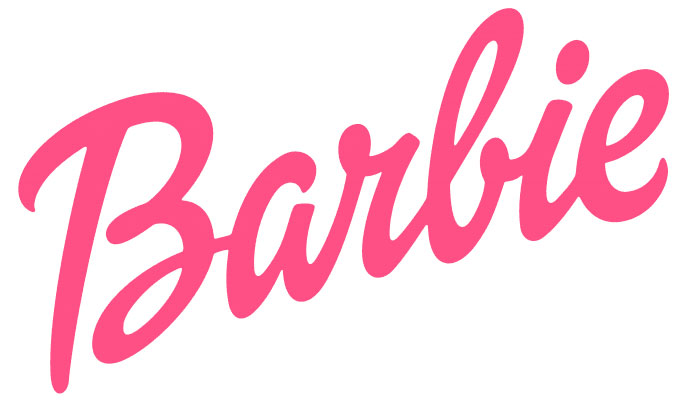 In 1999, the designers of the Barbie emblem once again updated the wording. As a result, the inscription was written in italics and bowed slightly to the right. Additionally, the letter “B” regained its slight inner curl, making it appear light and fashionable.

The brand name “Barbie” is written by hand in a single motion without severing the connection between the letters. The logo is rendered in a reddish color. 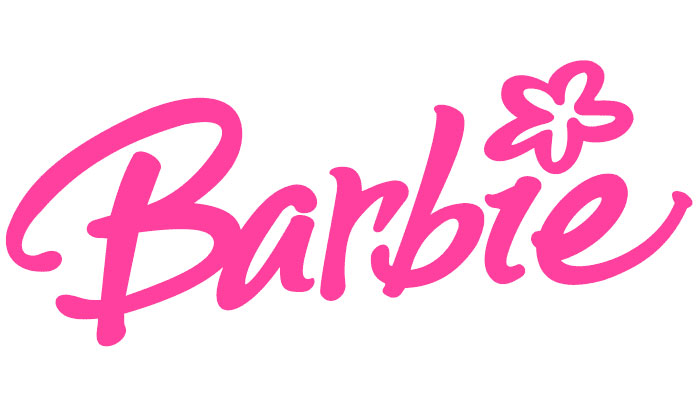 The Barbie logo had its fourth revision in 2004. The bottom and top of the letter “B” protrude past the front legs because the designers designed it aggressive and sweeping. The name seems to gallop because the letters are spelled differently without an inside connective.

Lowercase “b” gained a ponytail, while I received a flower with five petals in place of a dot. As a result, the Barbie management team ensured the inscription appeared as innocent as possible.

After being used for four years, the Barbie has transformed again: the flower made way for a classic dot. The letter “e” had its leg extended upward, but the letter “a” remained open. 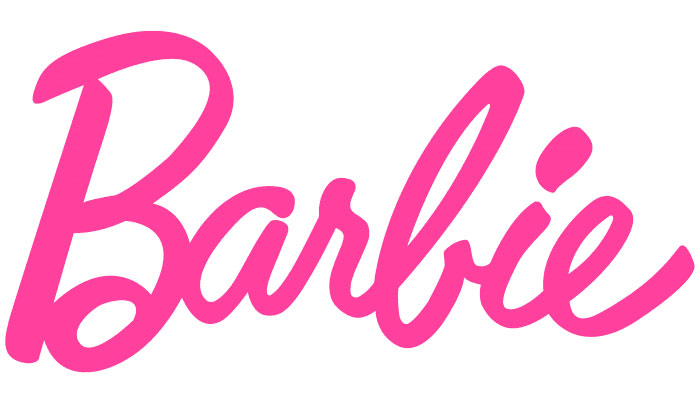 Barbie made sure all the attributes stayed the same by bringing back the model from 1959. This concept exemplifies the Barbie brand, aesthetic, and attitude. 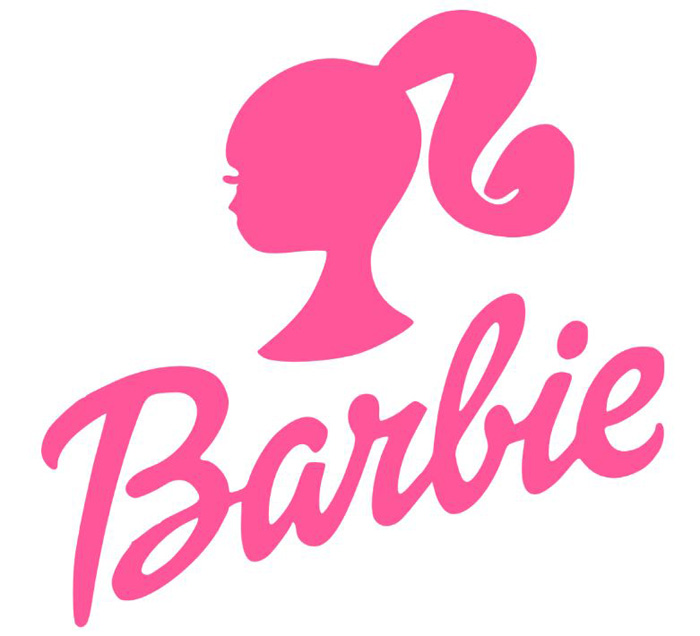 Color: Candy pink has long been associated with the Barbie brand. The second iteration from 1975 featured a paler shade of pink than the first. Although it was a little lighter, the hue of the 1991 edition resembled the original version better. The pink in later logo designs have become more saturated.

Font: The brand’s name is written in a handwritten, italic typeface in the current Barbie logo, which has a whimsical, refined, timeless look and feels.

The Barbie logo has changed quite a bit since it was first used in 1959, but the general design has mostly remained the same.