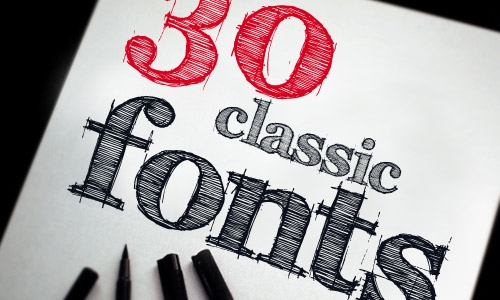 Typeface is a basic element for reading and designing. Fonts are the windows to typography and it can affect your audiences depending on the typeface chosen. Year after year, new fonts are introduced to the public and it even evolves from the simplest to the grandest layout with many artistic touches. Classic fonts are still the best sellers for most font users as it offers simplicity and professional approach at the same time.

Looking for the best classic fonts? Here are some of the most used and famous classic fonts that you should check out:

Helvitica is a typeface design by Eduard Hoffmann, Max Miedinger and Matthew Carter in 1957 with simplicity in mind but with professional approach. You can use this typeface for any type of theme designs and layouts you may want. Helvetica is one of the most used classic typefaces ever since 1950s up to this day.

Lucida Sans is designed by Charles Bigelow and Kris Holmes in 1986 together with other typeface in Lucida font family. It offers a professional looking font with numerous style varieties and font weights. It has many available icons and symbols too perfect for any type of design elements.

Clarendon is a classic typeface design by Eduard Hoffman and Herman Eidenbenz in 1845 and was later redesign in 1953 with more alternate cuts to offer like the euro signs and other special signs and characters. It has different variety set collections which are all perfect for any type of layout designs you want to create.

Calibri is designed by Lucas de Groot in 2006 and was later included in the Office 2007 font collection for Windows. It looks simple with rounded corners and edges which are available in different weights like italics, bold and others with numerous numeral sets as well.

Impact is a beautiful font family that offers you variety of powerful fonts in different weights like Impact URW, Impact URW D Bold and Impact URW D Bold Condensed. This font is good choice for logos, photographic layouts and other design elements in which font are given more emphasis.

News Gothic is design Morris Fuller Benton in early 19th century as one of the standard American sanserif created by Benton specifically for ATF. This font look neat and clean with sharp edges, simple but very clear perfect for news prints or publishing designs.

Akzidenz-Grotesk is one of the oldest font designed way back 18th century with many available font weights to offer including light, bold, med, med italic, bold italic, extrabold, superbold, superbold italic and more perfect for any design layouts.

Avenir is design by Adrian Frutiger in 1988 after being inspired to create san serif similar to Futura and Erbar but with more modern approach. After years of experience and interest to typefaces, he finally made out Avenir that means “future” in English.

Frutiger is design by Adrian Frutiger in 1968 when he was commissioned to create sign for Charles de Gaulle Airport. Instead of using his famous Univers font, Frutiger decided to come up with Frutiger font for easy recognition and distance reading and was later used for most of today’s signage as well.

Futura is design by Paul Renner way back in 1927 that inspired many typeface creators to create their own font designs too. This font is one of the oldest san serif classic fonts that Renner has created along with many other beautiful font collections.

Franklin Gothic is design by Morris Fuller Benton in early 19th century, one of Benton’s best typefaces and one of the most popular san serifs as well. Few years later it was revived by Victor Caruso to add more details and weights to come up with 3 beautiful font weights after revision.

Myriad is design by Robert Slimbach, Carol Twombly, Christopher Slye and Fred Brady in 1992. This font is Adobe’s original font designs specifically created for Adobe font collection. This font has clean and neat details with sharp edges and open spaces.

Optima is another beautiful font creation by Hermann Zapf guided by Walter Cunz in 1950s to perfectly create this very elegant, clean and legible typeface that could perfectly give your designs the best font styles with simplicity and professionalism.

Univers is design by Adrian Frutiger in 1957, one of Frutiger’s best font styles that gave him the opportunity to commission many signs for different sign projects. This famous font has discipline central design that gives more uniform series.

Tahoma is design by Matthew Carter and Tom Rickner under Microsoft’s sans serif font families. This font is design to fit on small spaces like dialog boxes in creating menus and others especially in using Microsoft Office tools.

Trebuchet is design by Vincent Connare in 1996 to focus on clarity and readability even on small spaces. This font is neatly combined and with distinguishable details to make it more recognizable at one look.

Century Gothic is another great font design by Morris Fuller Benton with the help of Sol Hess to come up with this font that has clean cut edges, with perfect cursive details and neat open spaces perfect for large icons and signs.

Georgia is design by Matthew Carter and Tom Rickner way back in 1996 for Microsoft font collection. This font is the first attempt of Carter to create a more friendly and charming font for public use that could cater both legibility and simplicity combination.

Cambria is design by 3 of the best typeface designers in 20th century for Microsoft font collection. Jelle Bosma, Steve Matteson and Robin Nicholas come up with Cambria to soothe the need for strong and even spacing letterforms that could compete with other classic fonts.

Adobe Garamond is design by Robert Slimbach in 1989 inspired by the skill of Claude Garamond’s typeface in 15th century and other revision by different typeface designers like Robert Granjon, after many revisions have been involved with this typeface, it was Slimbach who finally gave the expanded letterforms and created Adobe Garamond as a complete font family.

Bodoni is design by Giambattista Bodoni in early 19th century and was later revived by Morris Fuller Benton in the 20th century for ATF. The former Bodoni is a cutting edge font already and was given more detailed emphasis on different weights after the revival.

Cajoun is design by Hans-Jurgen Ellenberger way back in early 20th century with combination of simplicity and elegance in one. This font has very neat cursive details with clean cut sharp edges and corners.

Palatino is design by Herman Zapf in 1986 which is based on his own calligraphic design and most likely similar to eccentricities of Trump Mediaeval. This font is Zapf’s first successful font with beautiful traces and with many available font weights to offer.

Times is design by Victor Lardent and Stanley Morison in 1932 specifically design for newspaper typeface. Times is generally one of the basic typefaces used for most of news prints and other publishing materials.

Baskerville is design by John Baskerville and George William Jones with 4 available font weights in bold, italic, roman and bold italic weights. This is one of the most used fonts that have offer many layout designs up to this day.

Caslon Clasico is design by Franko Luin in 1993 inspired from William Caslon’s typeface in 16th century. This font family is known as king’s script that gave life to other political typefaces with clean and professional approach.

Bembo is design by Aldus Manutius, Frank Hinman Pierpont and Francesco Griffo in 1929. This font family has many beautiful weights to offer for your designs and can offer many different alternate cuts, symbols and numeral sets.

Sabon is design by Claude Garamond, Jan Tschichold, Hecto Haralambous and Alexei Chekulayev in 1967 from both Monotype and Linotype machines that could create a perfect technical and text composition. You will love this font family as it has a lot of font weights available with semi-sharp edges and beautiful cursive details on italics fonts.