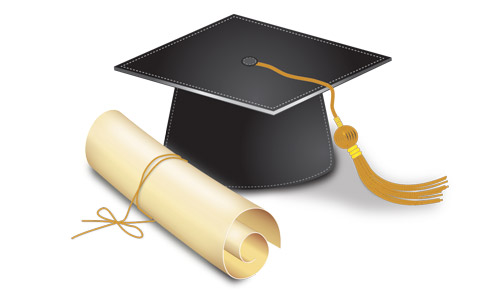 In this tutorial, we will explain how to illustrate a graduation hat and certificate. The precision of the hat’s band illustrating and folded certificate are very attractive. Moreover, various shadows and brightness make this illustration very life-like.Let’s get started!

2. Fill it with a radial gradient.

3. To create the hat’s stitches, hold the Alt Key and drag the shape to duplicate it. Empty the inner color of the new shape and add a white outline to it. Go to Stroke Palette > Dash Line and set it as shown. 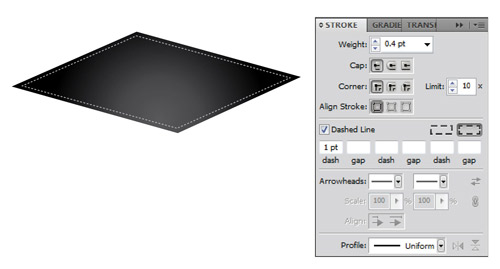 4. Draw a narrow band using the Pen Tool. Fill it with the appropriate gradient. Put it under the rhombus as the hat’s ledge.

5. Copy the black rhombus and move it under the object using Object > Arrange > Send to Back. Fit it so that a black ledge appears.

6. Draw the hat’s body using the Pen Tool. Fill it with the same gradient as what was used for the rhombus. You can set its location by using the Gradient Tool from the Tool box.

7. Copy the body and create some stitches as you did in step 3. 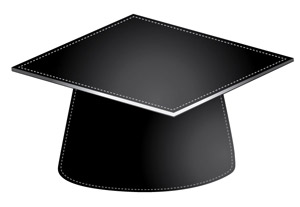 8. To create a button, draw an ellipse using the Ellipse Tool. Fill it with a darkish gray color. Go to Effect > Stylize > Inner Glow and set as shown to make the outside of this button dark.

9. Add some stitches around the button as you did in step 3. 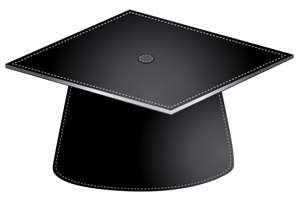 10. Draw a line using the Pen Tool to create a decorative band. 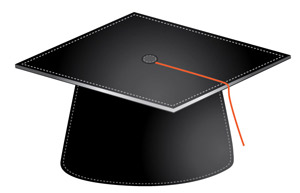 11. To create the appropriate texture on the band, draw two rectangles side by side. Fill them with colors as shown. Select the rectangles and send them to Brush Palette. In the window, set Pattern Brush and click Ok. The brush settings window should be set in this way. After selecting the band and creating brush, a texture will move on the brush. Click on the bottom option of the Palette to set texture. Increase or decrease the texture scale to create the appropriate shape and thickness for the band.

12. Draw a rounded rectangle using Rounded Rectangle. Fill it with the appropriate gradient. Paint its outline with bright brown. Copy it four times and put them under one another. Add a tassel to the band.

13. Draw a black circle at the end of the band using the Ellipse Tool. 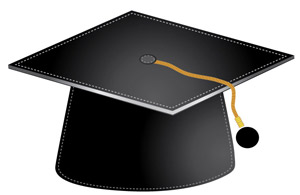 14. Draw a circle and put an ellipse in the middle of it (1). Select the circle and ellipse and go to Object > Blend > Make (2). Select the created shape and the created brush from brush palette. Draw it to form a bunch of string (3). Put it at the end of the band and on the black circle. 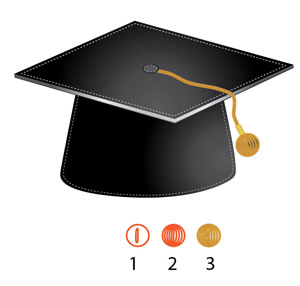 15. Make a slightly bigger copy of the tassel made in step 12. 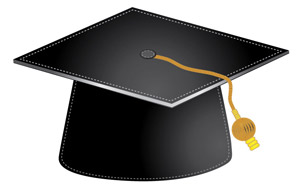 16. Draw several lines for the band using the Pen Tool. It is faster to draw several curves and duplicate them. 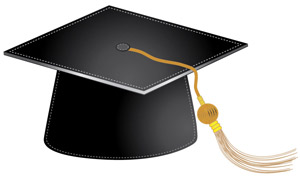 17. Select the lines (or curves) of step 16 and select the created brush in step 11 from Brush Palette. 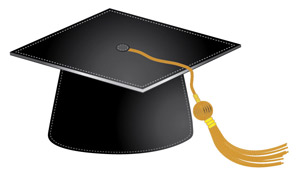 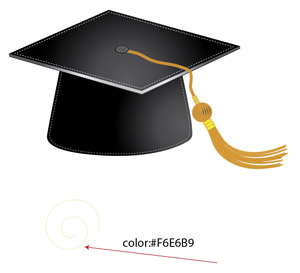 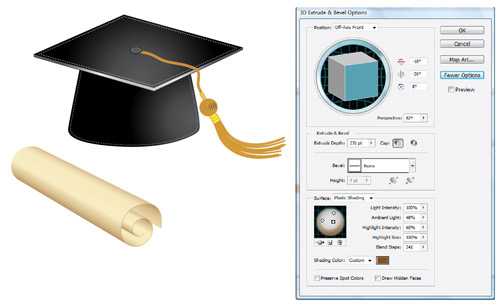 20. To expand the 3D effect and make it editable, go to Object > Expand. To change certificate form, go to Effect > Wrap > Arch and set as shown. 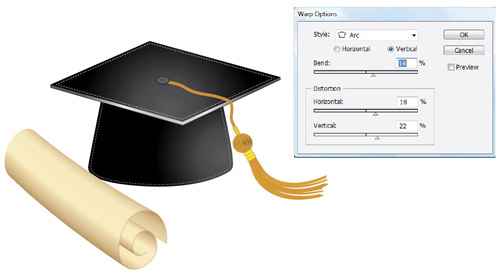 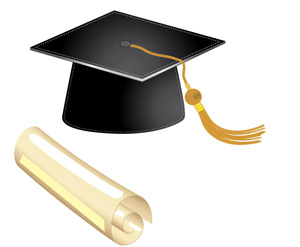 22. Blur partially the previous shapes by using Effect > Blur > Gaussian Blur. Draw some shapes using Pen Tool at the end of the certificate to create shadow. 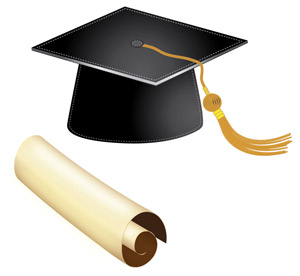 23. Select the previous shapes. Go to Transparency Palette and set as shown. 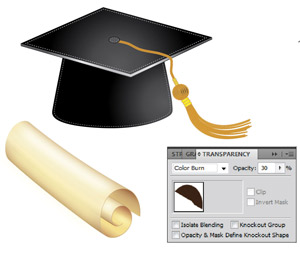 24. Draw some lines as string using Pen Tool. Draw the string to form a tied ribbon. 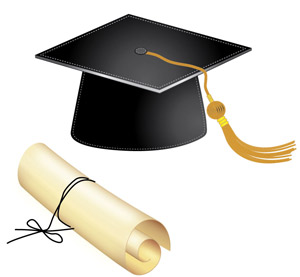 25. Select the string and apply a simple brush from the Brush Palette for the string. This make it look more realistic. 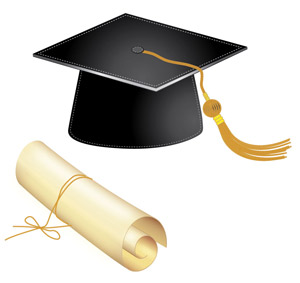 26. Draw some shapes at the areas that have shadows. For example, draw those at bottom of the hat and decorative band. 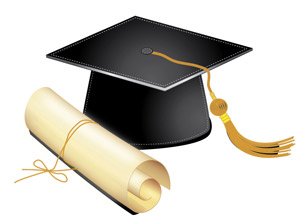 27. Select the previous shape and go to Effect > Blur > Gaussian to blur it. Select the string of the certificate and make a black copy of it. 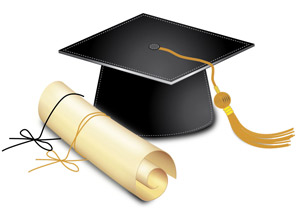 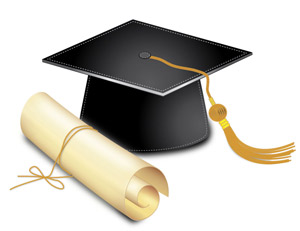 29. Draw a big shadow under the hat and decorative band. For this, draw a shape using the Pen Tool as shown. 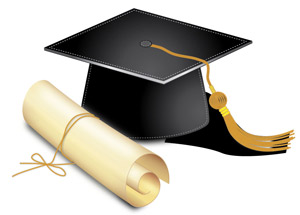 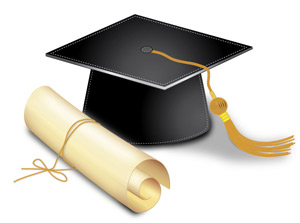 31. Paint the outer lines of the certficate segment with white. You can take a copy from it and fill with white. 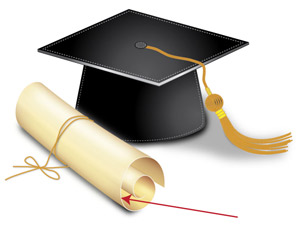 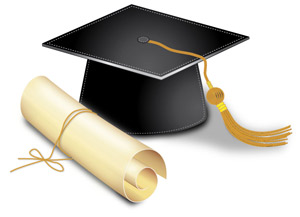