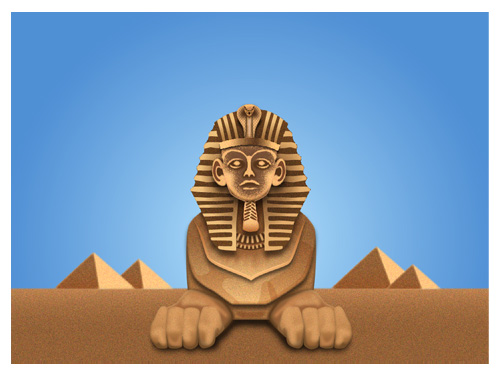 In this tutorial we’ll be creating a realistic Sphinx in Adobe Illustrator. We’ll use some basic shapes along with simple freehand drawing, and then we’ll add spectacular effects, making the Sphinx look more real with the help of some effects that will help us to add some texture to our illustration. Let’s get started!

Create the Front Legs of the Sphinx

46. With the help of the Pen Tool (P) and the Gradient Tool (G), create two shapes like you see in the images below. Next reselect the smaller shape and apply a 9px Feather effect for it. 48. With the help of the Pen Tool (P) and the Gradient Tool (G), create eight shapes like you see in the images below. Next select four smaller shapes and apply a 4px Gaussian Blur effect for them. 49. Continue with the Pen Tool (P) create two objects and then fill them as shown in the images below. Reselect the two newly created shapes and apply a 4px Gaussian Blur effect for them. Now focus on the next to last image, using the Pen Tool (P) create a curved path, with a 5px brown stroke (# 4F3016) and no fill. Next apply the Width Profile 1 and a 3px Gaussian Blur effect for the resulting path. 50. Select the bigger shape created in the step 46 and four first shapes created in the step 47, then make a copy (Ctrl +C, Ctrl +F) of them and bring the copies to front (Ctrl +Shift +Right Square Bracket). Keep the newly created shapes selected, open the Pathfinder palette (Window > Pathfinder) and click on the Unite button, then replace the existing color of the resulting shape with dark orange (# A47145). Make sure that the new shape is still selected and go to the Effect > Texture > Grain… Follow the data as shown in the third image and click OK. Finally apply a 5px Feather effect for the resulting shape then set it to Blending Mode Darken and reduce the Opacity to 60%. 51. Select and group (Ctrl + G) all objects created from beginning step 46 to this time. Make sure that the newly created group is still selected and go to Object > Transform > Reflect. Check the Vertical box then press the Copy button. Select the resulting group, drag it to the right and place it as shown in the second image. 52. To give a more realistic look I'm going to be adding some shadows for the Sphinx. With the help of the Pen Tool (P), create two objects like you see in the first and the second images. Select the two newly created objects, remove their strokes and fill them with black (# 000000), then reduce the Opacity of the resulting shapes to 70%. Reselect the bigger shape and change the Opacity to 20%. Now select the two shapes created in this step and apply a 5px Gaussian Blur effect for them, then send the resulting shapes to back (Ctrl +Shift +Left Square Bracket). ... end of preview. Sign up for premium membership to read the whole tutorial!