A superhero’s logo is more than just a symbol – it’s a badge of honor. It’s a mark of strength, courage, and justice. Over the years, there have been some truly iconic superhero logos. From Superman’s “S” to Spider-Man’s spider, these logos have come to represent the characters they represent.

Logos and Meanings of Superheroes

When it comes to the meanings behind the superhero logos, each icon stands for a quality that is distinctive to that particular hero. The image that symbolizes hope in Superman’s home country serves as his emblem. Batman symbolizes the bat’s shady and covert look, which is also his favored mode of operation. Additionally, because he had once been scared of bats as a child, it served as a reminder that all fears can be conquered.

Batman’s bat symbol is an instantly recognizable logo. It represents power, fearlessness, and justice – everything that Batman stands for. The Green Lantern logo uses a design feature that resembles both a lantern and a ring. This is to represent both the lantern from whence he draws his power and the ring he wears to wield it. The color pattern of this design, which is green with a white background, is representative of the name of the Green Lantern superhero. Superman’s “S” is perhaps the most legendary superhero logo of all time. It stands for truth, justice, and the American way – values that Superman has come to embody. The Captain America logo is one of the most iconic symbols in American pop culture. The star-spangled shield has been a part of the character’s identity since his debut in 1941, and has appeared in everything from comic books to movies to breakfast cereal. The shield is not only a symbol of Captain America’s heroism but also of his patriotism.

It is a powerful reminder that even in the darkest of times, there is still hope for America. The shield is also a source of inspiration for many people, who see it as a symbol of strength and courage. Whether you’re a fan of Captain America or not, there’s no denying that the shield is one of the most recognizable and cherished symbols in our time. One of the most well-known antiheroes in the Marvel universe is Frank Castle, better known as the Punisher. He frequently follows gory and sinister paths to accomplish his objectives, and his deeds are far from heroic. His logo, a stylized skull, is supposed to convey the idea that he is seen as the bringer of death and destruction.

Deadpool, sometimes known as “the merc with a mouth,” is best known for two things: slicing bad guys in half with his dual katanas and speaking directly to the audience while doing it. The Deadpool logo captures each of these qualities. The use of the colors red and black conveys notions of violence and peril. The amazonian warrior princess is one of the most powerful female superheroes, and her logo reflects that strength and determination. The entwined Ws stand in for Wonder Woman’s name, and they are both beautifully designed to resemble a bird’s spread wings. Additionally, her logo is impossible to overlook because of the gold Ws. 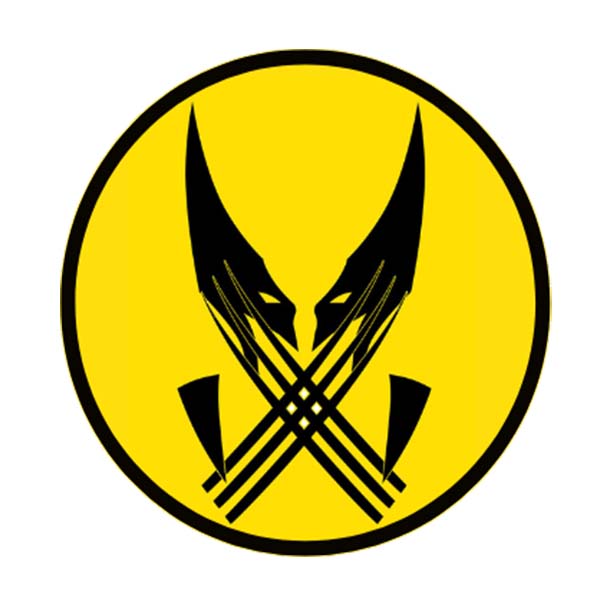 Wolverine is one of the most iconic superheroes in the universe, distinguished by his recognizable mutton-chops sideburns and grim demeanor. He frequently loses control when fighting his opponents but has still been able to win battles against stronger adversaries. It makes him one of the few characters who cannot be killed, especially when coupled with his extraordinarily healing skills.

The Flash as the fastest man alive uses a symbol  more closely connected with speed than any other which is a lightning bolt. He uses this symbol in his logo to symbolize his extraordinary speed. This lightning bolt surrounds a white circle and a red background, creating a cheery and vibrant design that both captures The Flash’s agility and his well-known sense of humor. It can be challenging to merge four distinct heroes with diverse abilities into one symbol. Still, the Fantastic Four chose a more direct route rather than attempting to combine everything.

The number 4 displayed prominently and the color blue stands for both their suits’ color and their calm, scientific dispositions. Their combined qualities are what give them strength. The Spiderman logo is one that often changes from comic to comic depending on the material’s tone and intended audience. In the more lighthearted Spiderman comics, the logo features a softer and more rounded spider design while in Spiderman’s darker, more adult-oriented outings the spider has long, thin legs and sharp points. This ever-evolving design is in keeping with the nature of Spiderman himself, who can range from lighthearted and joking to deadly and violently serious depending on what is at stake. This blind hero has sharp perceptions. He can fight crime even while blind. His logo projects him as a risk-taker and a warrior who isn’t afraid to get his hands dirty. His name indicates two Ds, and the color red indicates a threat of violence. The first superhero that comes to mind when we hear the name “Avengers” is Iron Man, a.k.a. Tony Stark. He may be one of the most well-known Marvel characters, but he is unquestionably the foundation around which the Marvel Cinematic Universe has built a decade’s worth of narrative that has brought in billions of dollars in income.

Many villains and other superheroes view Tony Stark as a wealthy man toying with high-tech toys. He has, however, consistently shown that he is more than just a piece of armor. He has faced up against some of the Marvel universe’s toughest opponents while being one of the smartest heroes in the known galaxy. Fans of the comic books recognize Black Panther as one of the most potent superheroes in the Marvel universe, although he only recently made his debut in the MCU. He is from the mythical and secretive African nation of Wakanda and calls himself by the name T’Challa. The Avengers logo is one of the most popular icon in Marvel. If you look closely, you can notice an arrow with a clear “call to action” to battle crime in the Avengers logo that employs the letter A to represent the team, a circle emblem to illustrate how they are unified.