It often happens that, we have  couple or more shapes/objects overlapping each other with varying transparency & for some reasons we don’t want them to show through each other.

The solution for this is pretty simple. Just select the shapes, like in the above example both the rectangles & Group (Object>Group) them & from the Transparency palette click on the Knockout Group so that a checkmark is On & poof now the object don’t show through each other! 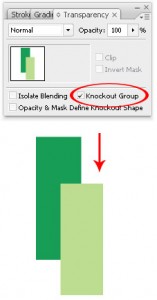 You can do this with the multiple objects as well. 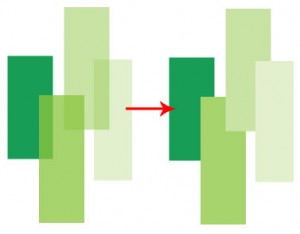 It is worth noting that you either have to Group the objects or select the Layer for the Knockout group behavior to take effect.
Also, the Knockout Group has 3 states, as shown in the image below:

The on & off states are pretty explanatory, you may use the neutral state when you want to group objects without interfering with the knockout behavior determined by the enclosing group or layer.